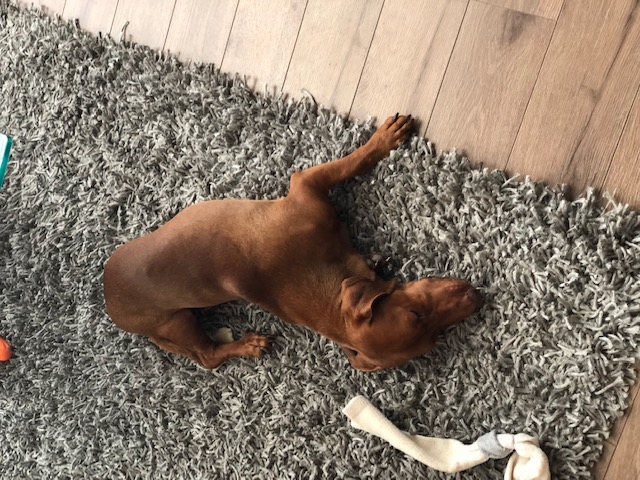 This post is about something near and dear to all of us dog people. Think of how many times a day you say “leave it!.” The standard command to let your dog know to leave whatever they are trying to put in their mouth. This includes food, clothing, leashes and all the non-food items that they crave so much! Here we are going to talk about three common items that can be lethal to dogs. The first began with a phone call to my sister when Rusty got some gum stuck on his paw pad. When I asked her advice on how to remove it she exclaimed, “I hope it’s not sugar free, is it?.” I didn’t know, I didn’t taste it! but then she told me about something I was not aware of…Xylitol.

If you have never heard of it, neither had I. Xylitol is a naturally occuring substance that is widely used as a sugar substitute. Chemically, it is a sugar alcohol. Xylitol is manufactured into a white powder that looks and tastes similar to sugar. Example of products that contain xylitol include, Sugar-free gum,candies, breath mints, baked goods, pudding snacks, cough syrup, children’s chewable or gummy vitamins and supplements, mouthwash and toothpaste. It is also showing up in over the counter nasal sprays, laxatives, digestive aids and allergy medicines. There are several more items in the ever growing list of products that contain the product so, do your homework.

The reason that xylitol is toxic to dogs and not humans is that xylitol does not stimulate the release of insulin from the pancreas in humans. In non-primates, including dogs, the xylitol is quickly absorbed into the blood stream, resulting in a potent release of insulin from the pancreas. This rapid release can cause a rapid and serious decrease in the level of blood sugar, an effect that occurs within 10 to 60 minutes of ingestion. Untreated this can be life-threatening. The most common source of xylitol poisoning reported id sugar free gum. Although some brands of gum contain fairly small amounts of xylitol so it might take take 9 pieces to cause severe hypoglycemia with 45 piece to result in liver failure, based on a 45 pound dog.

Symptoms of xylitol poisoning include vomiting, weakness, lack of coordination lethargy, tremors, seizures and coma. If you suspect or even know that your dog has eaten one of the products that are in the list, contact your veterinarian immediately, Since toxicity develops rapidly your veterinarian may not wait for a confirmed diagnosis before beginning treatment.

This brings me to the second item on the list. I happen to live in a state where recreational marijuana is legal. I should say right now that I don’t personally use it but I also don’t condem those that do. This being said, one of my dogs, Rusty has developed a fondness for it (I think) as he has found some at least four times that I know of. The first time, I had reason to suspect xylitol poisoning, because I saw him grab something on our morning walk that looked like it was blue or green, After being gong from the apartment for about an hour, I came home to find him displaying many of the same symptoms of xylitol poisoning. I only suspected this after doing a frantic internet search. I rushed him to the vet and after a short wait in the waiting area, thinking beyond doubt that I might loose my sweet boy. When the Doctor cam out and informed me that she suspected weed, I was relieved! They performed the tect where it was confirmed. They induced vomiting, gave him an anti-agent for what they use to induce vomiting and sent me home with a $300.00 bill. As I said, I know of at least three more times, so I strongly believe that he is seeking it out. This started me on a path of educating myself and anyone else who would listen, about the dangers of dogs getting hold of weed. Although not as severe as xylitio, ingesting marijuana can have a moderate affect on some dogs and a sever one on others. To be clear, it is not beyond the possible of being fatal. As I mentioned before, the symptoms are very similar to xylitol poisoning so definitely contact your veterinarian. I also took it upon myself to contact the government agency that regulates the sale of marijuana here in Washington suggesting that they develop an education program to implement in all licensed retail locations. I am sure you can guess that they got right on that!

Finally, for the third item on the list… everything else! The possible things that our furry friends can snag and slurp down their throats are endless. We have a rule for our dog walking team that says “if you can’t see their snout, pull them out.” This refers to dogs shoving their heads into the invisible world behind the bushes! Here in Seattle, dogs have found dead rodents that most likely killed by poison. This can be as deadly for Fido as the rat. other dogs have found caustic substances that caused severe burns in their throats. This is a large city and there are a lot of scary things people throw on the ground so, assume nothing and stay vigilant!

This site uses Akismet to reduce spam. Learn how your comment data is processed.