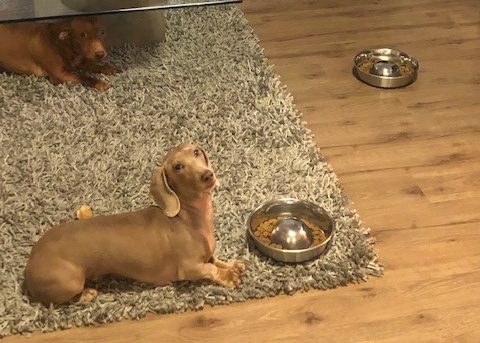 After working with a professional dog trainer the past four years, I realized one day that the single most important tool we have as dog owners is controlled feeding. When Frankie was a puppy, he would try to eat his food before the bowl hit the floor. It was then I undertook the task of teaching him that the food comes from me and not until I say. Today, it’s a matter of course when I feed my two boys that they present themselves where I feed them and then place themselves in the down position. I wait a bit and then put their bowls on the floor and then step away. They make no motion towards their food until I release them with the “okay” command. Now, this doesn’t just happen day one when teaching this. Here is how we got to where we are today. I would sit on the couch by the coffee table and give Frankie the down command. I would begin to lower the bowl to the floor and, if he popped up, I would return the bowl to the coffee table. We would repeat this exercise until he finally realized that he would not get the food until I said so. This is so fundamental as the rest of our relationship, as owner and dog, is built on this cornerstone. When I adopted Rusty at about the age of two, he too had to learn this dynamic, showing that it’s never too late begin.

This site uses Akismet to reduce spam. Learn how your comment data is processed.